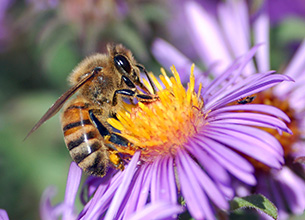 Bees in the Garden

With summer just round the corner, we are all used to seeing bees buzzing about in the garden. What many people forget is that bees are major pollinators around the world. In fact, over 70 of the worlds 100 top arable crop species which provide 90 % of the world’s food, are pollinated by bees.

Our honey bees and bumblebees are part of the Apidae family, which is one of the most socially organised insects forming colonies.

Last week the Guardian, BBC and the UN reported the work of Stephen J. Martin's team from the University of Sheffield, which detailed the link between the worldwide collapse of honeybee colonies and a bloodsucking parasite.

It's been estimated that the parasite could have spread a variant of a virus key to colony collapse disorder killing billions of bees, worldwide.

Stephen Martin's team has published an investigated into these mites and the emerging viral landscape as in 2007 they arrived on the Hawaiian Islands. Before the mites arrived, deformed wing virus was present in bee colonies in very low levels. Scientists tracked the progress of a new virulent strain of the virus as the mites became established on the Islands. They found that the new strain became dominant, thanks to multiplication within the mites, and remained dominant even after the mites were eliminated. This cycle led to mass bee deaths and has been shown to be a key factor in colony collapse disorder.

Of course, there is still the possibility that pesticides and herbicides such as neonicitinoid might play a role in increasing the vulnerability of bee colonies to this new viral strain. But it's clear now that these mites are transmitting the virus throughout the world and must be having an impact on decreasing bee colonies.

The findings from this research will now allow global scientists to make concerted effort to find a solution to the problem. Be it a an antibody, antivirus therapy, viracide which could be sprayed on crops and wildflowers or may be a mite-specific insecticide.

What to know what you can do to help bee colonies?

The easiest thing that you can do is to set aside a section of your garden for bee-friendly planting. If you grow you're own food you could set aside a strip between two beds of your food crops. This will encourage bees to pollinate your plants and give them a much needed friendly environment within our urban sprawl.

Why Gardening is Good For You

What is Tongue and Groove?